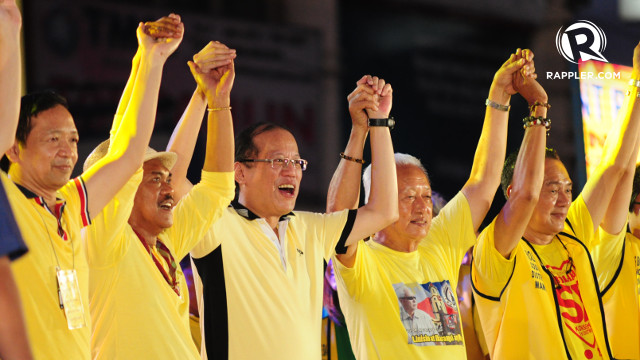 "Maghawak-hawak tayo ng kamay nang 'di maagaw ng diablo (Let's hold our hands together so that the demon won't take the city from us)," Lim's running mate Lou Veloso said. "Kapag naagaw nila sa atin, ano ang mangyayari sa Maynila? Kayo ay nililinlang sa salitang mahirap." (If they take it away from us, what will happen to Manila? They delude you with words about being poor.)

Veloso also criticized the Estrada camp for running on the platform of alleviating poverty.

"Kayo ba ay mahirap? Ang mga magnanakaw ng kaban ng bayan, sila ang mahirap!" he said, alluding to Estrada being convicted of plunder in 2007. (Are you really poor? Those who steal from the taxpayers' money are the ones who are poor!)

Lim, meanwhile, decried that Estrada made it look like Tondo was a cradle of criminals in his speeches. "Dito pinanganak si Gat Andres Bonifacio! Sa syudad ninyo ba, mayroon kayong mga bayani." (Andres Bonifacio was born here! Do you have heroes born in your city?)

'What have you done for us?'

Lim said Estrada did not provide school buildings and healthcare assistance to Manila residents during his 3-year stint as President.

"Noong naging presidente ka, may na-contribute ka ba sa mga eskwelahan ng Maynila? O kahit di na building, pako na lang? May nabigay ka ba? (When you were president, what did you contribute to the schools of Manila? Forget the buildings. Did you even provide nails for the schools?)" Lim asked Estrada.

Lim said the genuine pro-poor President is not Estrada, but Aquino, who has promised to help fund and renovate Ospital ng Maynila into a 12-storey airconditioned building.