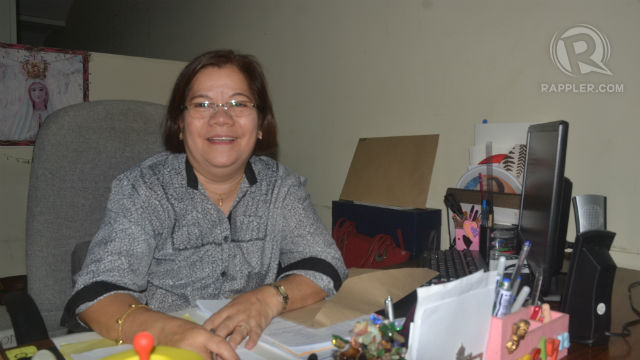 CONFIDENT. Calamba Comelec Chief Evelyn Parayan believes that the city is all systems go for elections. All photos by Ruben Espiritu.

CALAMBA, Laguna – In an effort to improve the political landscape Calamba, the provincial Comelec officers urged the public to put their vote-buying complaints into paper.

Calamba Election Officer III Evelyn Parayan said, “There are many reports but we can’t prove them if there are no concrete evidences that they are indeed forms of vote buying.”

Parayan said that they only received verbal reports of vote-buying and it was hard to believe and verify the reports.

“How can we verify these reports if there are no attachments? Put it in writing. Put evidence as attachments,” she said.

She said that most of the vote-buying complaints she received involved rice and groceries.

Despite problems experienced during the final testing and sealing (FTS) such as encountering 5 defective PCOS machines, Parayan said that her city is already 99.1% ready for the polls.

According to Parayan, there are no reports of jamming devices in the province.

She said that the province has not yet experienced signal jamming. If there are jammers, they could be deterred by the Comelec’s technical support staff because it could be detected by phone.

Parayan added that the city’s generators are ready for blackouts.

“The PCOS back-up batteries are ready, so I guess we are almost 99.1% ready,” she noted.

Parayan is also proud that her city remained peaceful ever since the campaign period started.

“Even though Calamba is huge in terms of voting population, we haven’t encountered any election-related violence,” she said in Filipino.

Calamba resident and registered voter Carlos Hernandez Jr, noted that the reforms instituted by the Comelec such as citizen’s arrest has limited effectiveness.

He said, “Citizen’s arrest due to vote-buying will be isolated. There is not enough incentive out there for voters to conduct a massive citizen’s arrest to address the massive vote buying. We should not count on it.”

Hernandez said that it would be safer if reporters of vote-buying and election-related violence would remain anonymous.

“It's a safer approach that concerned citizens can resort to. The last thing we want is to have any election-related violence. And I can only imagine the tendency of citizen arrests to be violent,” he said.

Calamba City has the largest voting population in Laguna. According to the local Comelec office, it has 248,612 registered voters, 295 clustered precincts and 58 polling centers. –Rappler.com

Ruben Espiritu is a Rappler Ambassador.