Officials contradict each other on Resorts World Manila attack

(UPDATED) Was it a terror attack or not? Did the gunman kill himself, or did police shoot him to death? Questions hound the deadly attack at a Manila casino.

The gunman – described by the Philippine police chief as a "foreign-looking" 6-footer with a moustache – reportedly killed himself after the shooting incident, fueling speculations about his motives. (READ: TIMELINE: Resorts World Manila attack)

Contradicting statements came from officials of both the Philippine government and Resorts World Manila on Friday. Information released so far also indicate a number of loopholes.

1. Terror attack or not?

It was the terrorism monitoring group SITE that first said an ISIS "Filipino operative" was behind the incident. Eventually, ISIS claimed that its "fighters" carried out the attack. But Dela Rosa claimed it was the handiwork of one man, a "lone wolf".

The PNP chief said of the gunman's act: "We're looking at robbery as an angle because he stole, he barged into the storage room for casino chips. He took the chips, put them inside his backpack but eventually left it. We have recovered the backpack."

Albayalde said the gunman had tried to steal P113 million ($2.3 million) worth of gambling chips, although he left the backpack on the ground near the stock room.

Referring to the gunman's act, Albayalde said, "We cannot relate it to terrorism because he did not shoot anybody."

Defense Secretary Delfin Lorenzana, however, said on Friday: "We are not yet ruling out that this is an ISIS act. It is so easy for ISIS to claim responsibility. Whether true or ISIS is just riding onto a done act, we still do not know." (READ: Terrorism and ISIS at Resorts World Attack?)

On Saturday, June 3, House Speaker Pantaleon Alvarez, a key Duterte ally, said he disagrees that the Resorts World Manila attack "was not a terrorist act but rather a criminal case of armed robbery and arson."

"This is a clear example of a 'lone wolf' terrorist attack targeting civilians to inflict maximum loss of life and damage to property, as what has happened in other countries," Alvarez said.

The other loophole in Albayalde's statement is the way he ruled out terrorism because the gunman "did not shoot anybody."

"Kung ISIS siya, namaril na siya doon (If he was from ISIS, he would have shot the people there)," Dela Rosa also said, explaining that a terrorist would have carried out a suicide bombing to inflict maximum casualties.

An act of terror, however, is not defined by the use of gunfire or by a huge number of deaths.

In a lecture uploaded by the International Crisis Group, terror analyst Sidney Jones said in 2013 that "there is no single definition of terrorism. But she said "there is wide consensus that it is a tactic, not an end in itself, involving a deliberate effort to create a sense of fear in a particular target population to achieve a political objective."

Paraphrasing scholar Martha Crenshaw, Jones said: "Terrorism is a form of violence that is primarily intended to influence an audience. It depends on concealment, surprise, stealth, conspiracy, and deception. Terrorism is not spontaneous and does not involve mass participation; it is carried out by a handful of people claiming to act on behalf of a larger group."

Still paraphrasing Crenshaw, Jones said of terrorism: "The act itself communicates a future threat to people who identify with the victims – it conveys the sense of 'You will be next.' The choice of time, place, and victim is meant to create shock, fear, or anger. Psychological impact is key. It involves maximum impact with minimum effort."

Terrorists achieve this goal through various means, not merely the use of gunfire.

For instance, an independent analysis by IHS Conflict Monitor, quoted by the New York Times in 2016, said ISIS "has used chemical weapons, including chlorine and sulfur mustard agents, at least 52 times on the battlefield in Syria and Iraq."

Jones also pointed out, "Not all terrorism involves large numbers of deaths: in 2011 in Indonesia, for example, we had 8 separate terrorist incidents and a total death toll of 5, including two bombers who killed only themselves."

"Not all crimes are instantly recognizable as terrorism. Suicide bombings have become the classic terrorist crime, but what about the robbery of an ATM or the shooting of a policeman? They might be terrorism, but they can also be acts of rebellion or ordinary crimes, depending on the circumstances and who was involved. Drawing those lines is not always easy," Jones said. (Rappler's Maria Ressa interviewed Jones in January 2016. Watch this Rappler Talk interview about ISIS here.)

In a Rappler Talk interview with Maria Ressa on Friday, former interior secretary Rafael Alunan III said a "hallmark" of a terrorist attack is having a venue that has "high human traffic" and is "frequented by foreigners."

Alunan knows this topic well as he used to chair the National Peace and Order Council, and the National Action Committee on Anti-Hijacking and Terrorism under then president Fidel V. Ramos.

On the sites of terror attacks in general, Alunan said that "casinos are not a surprise, like malls, schools, airports, et cetera."

3. How the gunman died

Dela Rosa claimed before 8 am on Friday, "The lone gunman is already neutralized; he's dead. He burned himself inside a hotel room."

The PNP chief said the gunman eventually went inside hotel room 510, where he doused gasoline on the bed, slipped himself under the covers, then set the bed on fire. When the police got into the room, the man was already dead.

In an earlier media interview, Dela Rosa said the gunman was "killed by our troops."

Later, Albayalde and Presidential Spokesman Ernesto Abella said in separate statements that the gunman shot himself in the head after setting himself on fire.

A photo of the gunman's dead and charred body showed him embracing his baby armalite when he died. This was supposedly after he shot himself in the head, based on Albayalde and Abella's statements. 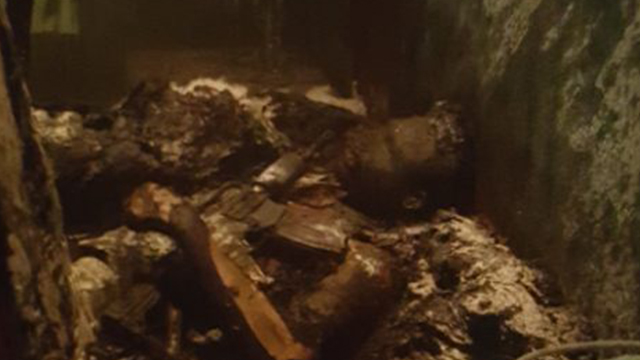 On his Facebook account, Alunan also called attention to reports that before the gunman died, a security guard managed to inflict on him a gunshot wound.

Alunan wrote: "Nagpakamatay ang gunman o pinatay? Kung binaril siya ng security guard at nasugatan, paano niya sinunog at binaril ang kanyang sarili? Sunog na sunog ang bangkay beyond recognition. Deliberate para hindi siya ma-trace?" (Did the gunman commit suicide, or was he killed? If he was shot and wounded by a security guard, how did he burn and shoot himself? The corpse was burned beyond recognition. Was it deliberate so that he cannot be traced?)

Police said a security guard sustained a gunshot wound after he accidentally shot himself during Friday's incident.

Resorts World Manila chief operating officer Stephen Reilly said, however, that the security guard sustained the gunshot wound when he exchanged gunfire with the gunman.

He said the guard shot the gunman, which "significantly slowed down the assailant" and forced him to retreat to a hotel room.

In his earlier interview, however, Reilly denied security lapses, saying that it is part of their protocol for security personnel inside to not have firearms. He was quoted as telling the media, "They did not engage because that would escalate the situation."

Apolinario said the security guard shot the gunman in the thigh.

Earlier on Friday, Albayalde told reporters, "There is no indication that this is a terror attack. It is a simple robbery and most likely it was done by a demented person."

Later, however, the Metro Manila police chief said authorities had some doubts about the robbery angle since the chips cannot be exchanged just anywhere, and the gunman dumped his stash as he fled police.

Alunan told Rappler on Friday, "I was shocked this morning to hear that it wasn't a terrorist attack but the handiwork of a deranged man who probably had lost a lot of money in the casino and wanted to steal money.

Apolinario said he heard from officials that this was the first time they saw the gunman, so he couldn’t have been a frequent guest.

The Bureau of Fire Protection told Rappler, however, that the suspect had been a "long-time guest" of the casino hotel.

Abella on Friday further described the gunman as an "emotionally disturbed individual."

He said most of the casualties in the incident, aside from the gunman, died "due to suffocation at the second floor gaming area," which the gunman set on fire.

Rappler asked Alunan on Friday about his reaction to the contradicting statements issued so far on the Resorts World Manila attack.

Alunan said: "First of all, I think it has to do with the way crisis management is being handled. Normally in situations like this, there's an official spokesman who speaks to the reporters. There's a formal press conference, and details, as the facts are unearthed, are reported. And usually we avoid speculating as to what happened."

"Normally detectives will not rule out anything. They put everything on the table, and then let the facts eliminate one theory from another, et cetera," Alunan added.

"But then that takes time. You can't have instant answers. So people have to be patient." – with reports from Bea Cupin, Rambo Talabong, and Agence France-Presse/Rappler.com