TIMELINE: SOGIE equality in the Philippines 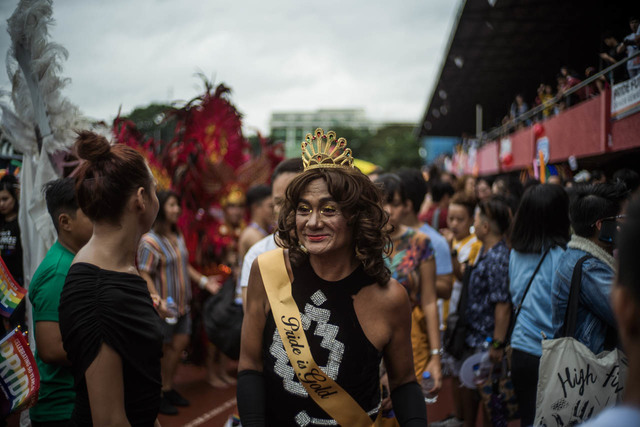 DECADES OF PRIDE. Ruel Mendiola, who imitates actress Cherry Pie Picache, participates in the 2019 Metro Manila Pride March as one of The Golden Gays. Photo by Martin San Diego/Rappler

MANILA, Philippines – After trans woman Gretchen Custodio Diez was barred from using her preferred restroom in a Cubao mall last August 13, one wonders how gender equality has fared in the country over the years.

While the protection of the LGBTQ+ is promised on paper, the Philippines is no stranger to notorious cases of hate crimes and abuse against the community.

In its latest version, Senate Bill No. 689, entitled “Anti-Discrimination on the Basis of Sexual Orientation, Gender Identity and Expression,” has not been passed in Congress after almost two decades.

It seeks to penalize discrimination on the basis of sexual orientation and gender identity or expression (SOGIE), and is more commonly known as the anti-discrimination bill or the SOGIE equality bill.

Years before a nationwide measure to specifically protect LGBTQ+ members was filed by lawmakers, activists had begun taking to the streets. An initiative by young lesbian feminists called The Lesbian Contingent joined the International Women’s Day march in 1993. Australian socialist magazine Green Left Weekly claimed it was the first time a lesbian contingent marched in public.

Various LGBTQ+ organizations had begun budding in the country. For instance, the University of the Philippines' Babaylan claimed itself to be the country's oldest LGBTQ+ student organization in 1992.

The earliest version of the SOGIE equality bill was filed in 2000 by the late senator Miriam Defensor Santiago and former Akbayan representative Loretta Rosales under the 11th Congress.

Refiled in the 14th Congress, the bills reached the committee level only. More senators would file similar bills in the 15th and 16th congresses to no avail. Other significant events are as follows:

Party list Ang Ladlad, which aimed to represent the LGBTQ+ community, files a petition to run in the 2010 national elections. An ABS-CBN report says the Commission on Elections (Comelec) denied the petition twice, citing “immorality” as basis. Its registration is eventually granted by the Supreme Court.

The Department of Education issues an order in May 2012 for the protection of children, including their sexual orientation and gender identity.

On August 3, then-Commission on Human Rights (CHR) chair and pioneer SOGIE bill sponsor Loretta Ann Rosales says the CHR is working on a database on LGBTQ+ hate crimes to better their prosecution and investigation.

By the end of the same month, then-Laguna representative Sol Aragones introduces House Bill No. 2572, which would make LGBTQ+ hate crimes an aggravating circumstance for crimes against persons and chastity.

Shortly after, then-Albay representative Grex Lagman files a measure that would help same-sex couples acquire property together. Neither bill has been passed.

Trans woman Jennifer Laude is murdered by a US Marine on October 11.

In the local government scene, former mayor Herbert Bautista signs the gender-fair ordinance in Quezon City on November 28. Prohibited acts include discrimination against the LGBTQ+ in the workplace, educational institutions, and in delivery of goods, services, and accommodation.

The ordinance also includes affirmative acts, such as equal pay and sensitivity training in the workplace.

This would become the law that protected Gretchen Diez when she faced illegal detainment at a mall office in Quezon City.

During the election campaign, then-senatorial candidate Manny Pacquiao calls same-sex couples “mas masahol pa sa hayop (worse than animals)” in a viral video interview by Bilang Pilipino. He has served two terms as a congressman by this time.

Bataan congressional candidate Geraldine Roman makes history as she takes her seat as the first-ever elected transgender woman in the House of Representatives in May.

The first Senate version of the anti-discrimination bill is filed on August 11 by Senator Risa Hontiveros, while its House counterpart remains pending.

After 17 years since its first filing, the anti-discrimination bill is passed by the 17th Congress on its third and final reading on September 20 with a vote of 197-0 in the House of Representatives.

The CHR backs the passage of the bill through a position paper dated October 8.

The anti-discrimination bill is due for passage by June before the 17th Congress adjourns. The bill languishes after suffering 3 years of interpellations.

On August 13, Gretchen Diez is blocked by a female janitress from using the women’s restroom. The janitress apologizes, but Diez vows to keep fighting for the rights of her fellow LGBTQ+ members. (READ: Gretchen Diez comes out)

After Hontiveros delivers a privilege speech on August 14, renewing her call for Congress to pass the SOGIE bill, Senators Imee Marcos and Bong Go throw their weight behind it.

Diez meets with President Rodrigo Duterte on August 19, and says he supports her and her push for the SOGIE bill.

Sotto strikes back with another remark about the bill having “no chance” of passing the Senate if it “transgresses on academic freedom, religious freedom, and women’s rights.” – Rappler.com