What you need to know about the Cebu City Jail

With a congestion rate of 1,000%, the facility has the most coronavirus infections out of any jail in the country 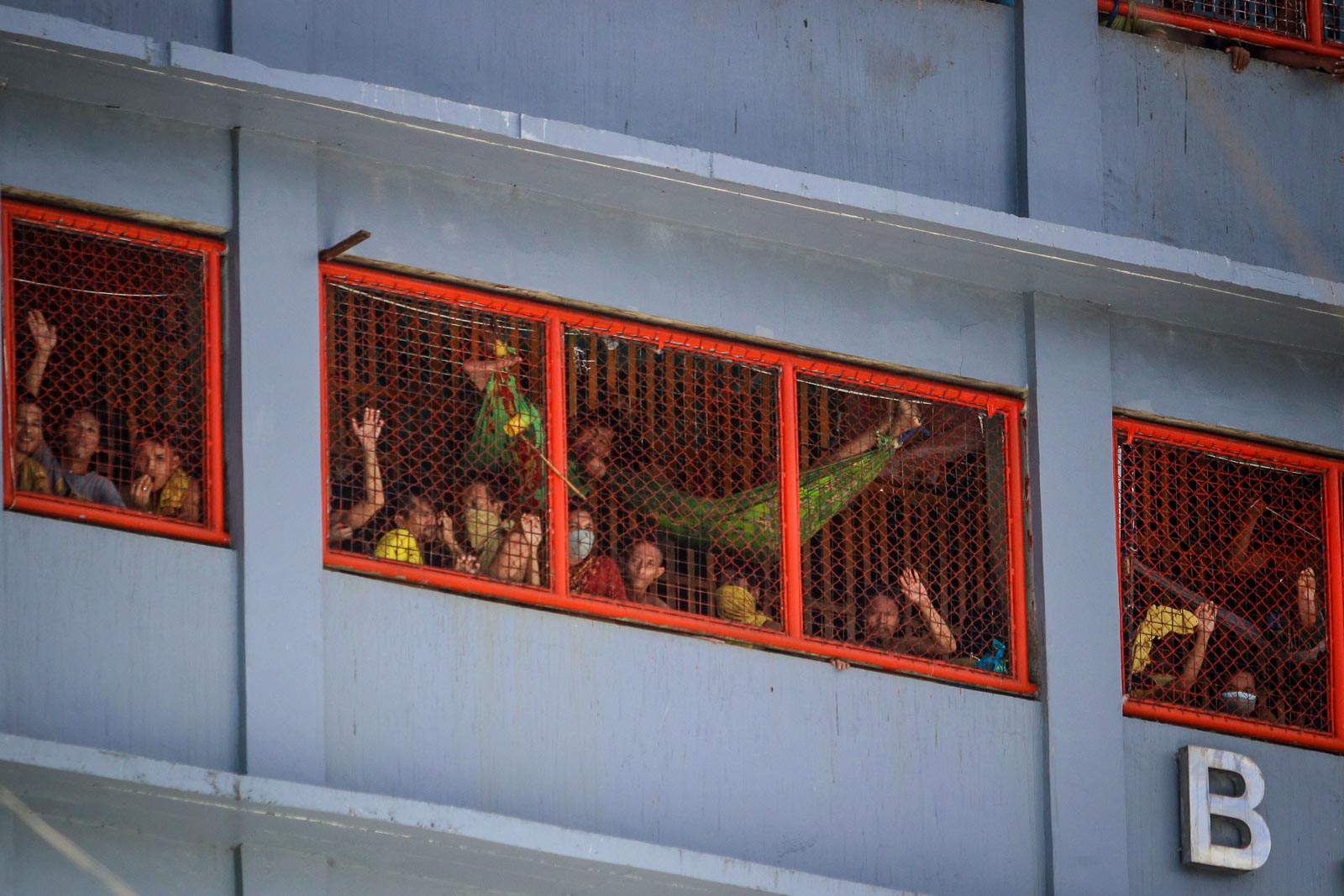 OVERCROWDED. At least 210 test postive for the coronavirus at the overcrowded prison. Photo by Gelo Litonjua/Rappler

CEBU CITY, Philippines – The Cebu City Jail – formerly known as the Bagong Buhay Rehabilitation Center – is currently the most crowded jail facility in the country with about 5,805 inmates, according to the Bureau of Jail Management and Penology (BJMP).

It also has the highest number of coronavirus infections among inmates and personnel of any jail within the Philippine prison system. As of Friday, April 24, there were at least 210 reported infections here.

Here are other things you need to know about the Cebu City jail:

Where is the jail?

The prison is located at Barangay Kalunasan, a mountain area of Cebu City.

The jail is next to the more famous prison, the Cebu Provincial Detention and Rehabilitation Center (CPDRC) – the facility known for its dancing inmates.

The old city jail was opened in 1975. It was first located in Barangay Lahug, next to the former airport (now the IT Park) and transferred to Kalunasan in 2007.

The inmates are those charged and convicted of crimes that happened within Cebu City, which is autonomous from the provincial government. The CPDRC, on the other hand, houses inmates whose crimes occurred within the jurisdiction of the Province of Cebu.

According to a Freedom of Information report released by the BJMP in March 2019, the Cebu City Jail had a congestion rate of 983% in the male dormitory, specifically.   The male dorm has 61 cells, according to the BJMP report.

Mayor Edgar Labella told reporters in October 2019 that the dorm has a capacity of only 82 inmates, but housed over 922, for a congestion rate of about 1,000%.

All detention facilities are prone to the spread of pathogens, but it is more worrisome now in the Cebu City Jail. (READ: 'Takot na takot kami': While government stalls, coronavirus breaks into PH jails)

They also planned to expedite the disposition of cases to decongest the prisons.   But that challenge has proven difficult since the beginning of President Rodrigo Duterte’s drug war in 2016.

The BJMP said in March 2019 that about 70% of detainees are facing drug charges.

While it is not as famous as the CPDRC with its dancing inmates, the Cebu City Jail has had its share of notable inmates.

The jail's most notable ex-inmate is Paco Larrañaga, who was arrested in Cebu in 1997 and convicted for the murders of Marijoy and Jacqueline Chiong.

GIVE UP TOMORROW. Paco Larrañaga, whose possible innocence was subject of a documentary, was once an inmate of Cebu City Jail.Thoughtful Robot

Larrañaga was the subject of a 2011 documentary Give Up Tomorrow. The documentary looked into the possibility that Larrañaga was wrongfully convicted and possibly framed by suspected drug lord Peter Lim. (READ: Is he top 'drug lord' Peter Lim? 9 things about the Cebu businessman)

His co-accused in the case – Josman Aznar, Rowen Adlawan, Alberto Cano, Ariel Balansag, James Andrew Uy, and James Anthony Uy – were all also detained in the facility when they were convicted in 1997.

In 1999, Larrañaga was transferred to the New Bilibid Prison in Muntinlupa City, and then to Spain in 2009 under a prisoner exchange treaty for Spanish citizens. (READ: Film seeks justice for Paco Larrañaga)

Fugitive ex-congressman and cult leader Ruben Ecleo Jr was also detained here when he was arrested for killing his wife in Cebu in 2002. He was released on bail in 2004. (READ: Ruben Ecleo Jr. no longer congressman)

Ecleo won a seat as Dinagat Islands' congressional representative in 2010, but went missing after a court found him guilty of his wife's murder in 2012. (READ: Still no Ecleo after a year of searching)

Adonis Dumpit, the late controversial police officer and ex-security aide of Tomas Osmeña, was also jailed here between 2008 and 2011 for killing a 17-year-old crime suspect during a police operation.

Dumpit was himself killed in an anti-drug operation in Tagbilaran, Bohol, in 2018. (READ: Tommy Osmeña’s ex-aide shot dead in anti-drugs operation)

Another infamous ex-detainee was drug lord Jeffrey "Jaguar” Diaz who was killed in a shootout in 2016 in the early days of the war on drugs. (READ: Cebu top drug lord killed in Las Piñas)

Suspected drug lord   Kerwin Espinosa was also detained in the Cebu City Jail from 2008 to 2011.

The National Bureau of Investigation (NBI) said in its 2016 charge sheet on Espinosa that it was within the confines of the Cebu City Jail where he was allegedly able to get his start and scaled up the illegal drug business.

Kerwin is the son of slain Albuera, Leyte, Mayor Rolando Espinosa. Kerwin was arrested in Abu Dhabi in October 2016, while his father was killed in a Leyte jail cell the following month. (READ: Albuera Mayor Espinosa killed in jail operation)

Former Bohol Provincial board member Niño Rey Boniel was also once housed at the Cebu City Jail in 2017, before being transferred to the CPDRC in 2018, where he is currently detained.

There are no high profile inmates currently detained at the city jail.

In March, the Cebu City Jail stopped accepting visitors during the coronavirus outbreak.

Mass testing commenced on April 20, the day after an inmate died after complaining of difficulty in breathing.

His tests came back positive.   From two inmates and two jail personnel, the number of individuals found positive ballooned to 210 in a span of 7 days.

Those who tested positive were moved to an isolation facility within the premises.

To try to address the plight of Philippine jails, the Supreme Court on Monday, April 20, ordered judges to release prisoners who fall under a 2014 guideline on lapsed sentences and jailed cases. (READ: SC orders urgent release of inmates with lapsed jail time, shelved cases)