Guess who's on Viber?

This is not to say they never really talk, it's just that distance and their own respective problems probably make it more challenging for metro mayors to go out of their way and reach out to one another. But technology, even as it has the capacity to wreak havoc, can also build bridges and create real good. This is something that the younger chief executives of Metro Manila have discovered for themselves.

In last Saturday’s September 21 Social Good Summit, organized by Rappler and the De La Salle University, we sat down with two mayors of major cities in Metro Manila – Joy Belmonte of Quezon City and Isko Moreno of Manila – along with urban planner Paulo Alcazaren (see photo below). I moderated a panel discussion on “Making Metro Areas Livable,” which rang some alarm bells even as it showed some signs of hope for the future.

Because the problems they face are multifarious and really quite staggering, the two mayors have bonded with other metro mayors on Viber – yes, that messaging app. They’re using it for closer coordination even for seemingly mundane but high-impact announcements like class suspensions. Read more about it in this Inside Track story under Newsbreak: Metro Manila mayors use Viber group to coordinate class suspensions.

As Moreno himself disclosed, their Viber group has allowed them to become more familiar with each other’s problems and probably less parochial in perspective. Agreeing on possible solutions for common problems, such as traffic and road management, is key. 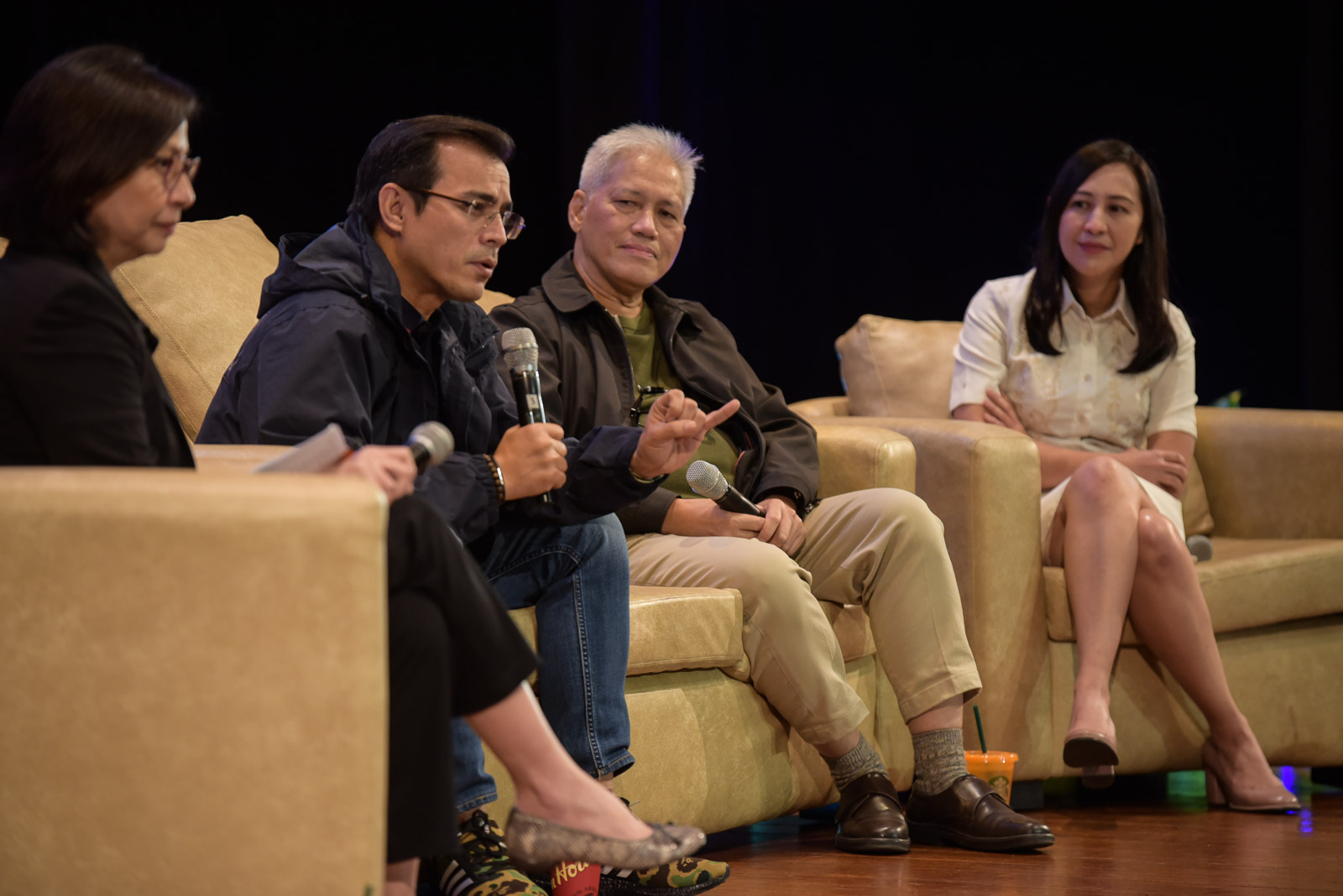 Disjointed. For example, just to illustrate how dysfunctional and disjointed it can get, traffic rules in one city are different in another, such that the number coding scheme lifted in Pasig City does not apply to nearby San Juan and even Makati. A motorist can drive freely in one city but get apprehended in an adjacent city if he didn’t know about the disharmonious, uncoordinated traffic rules. Or a pedestrian footbridge that begins in one city (Pasig) is terminated just before the boundary of an adjacent city (Mandaluyong). Insane, isn’t it?

Remember that Metro Manila consists of 17 local government units (LGUs) – 16 cities and the lone municipality of Pateros. That translates to 17 autonomous kingdoms powered by the 1991 Local Government Code, which essentially devolved functions and privileges from the national government to the LGUs.

Whereas before there was one all-powerful governor (Imelda Marcos) who held sway over the Metro Manila mayors, today the elected mayors work with an appointed (not elected) head of the Metropolitan Manila Development Authority (MMDA). And because that head is not elected, all he can do is appeal to the good sense of the elected mayors; in reality he holds no political suasion and is effective only as administrator or coordinator.

Metro woes. Yet consider the enormity of the problems facing the metropolis:

Federalism, according to Belmonte, would make the metropolis a region with one elected governor who would obviously have more clout. Metro Manila would be autonomous from the national government and would enjoy tremendous powers as an independent region. While Moreno is amenable to having an elected Metro Manila governor, he prefers to work within the current system and not have to resort to a change in the system of government. You may want to read: Belmonte, Moreno asked: Does Metro Manila need an elected governor?

But wait. Urban planner Paulo Alcazaren emphasized the need for planning. In a private conversation, he said foreign students, in fact, come over to study the challenges posed by Metro Manila so that we really have no need for foreign consultants to fix our problems.

Alcazaren put it well: “I do have to remind everyone that traffic is not the problem. Traffic is just the symptom of the problem of the lack of [an] integrated, comprehensive transport system in the whole metropolis...and that is rail-based mass transport system.”

Let me know what you think via chay.hofilena@rappler.com!

Read these other Newsbreak stories, too, so you don't miss out on key issues:

On Thursday, September 26, I'll be sitting down with Rappler reporters Lian Buan, Aika Rey, and Rambo Talabong for our monthly Newsbreak Chats. We will be talking about the confusion over the Good Conduct Time Allowance law and how government has tried to fix it. Join us at 4 pm, Manila time!