We’ve all been young once, the short-fused years when we got easily triggered by small and big things, or by what we thought was bad and wrong. This constant low boiling point also allowed us to demand a better world from our elders, and take action when they would not listen.

We have not seen the last of the student protests – whether against sexual harassment or extrajudicial killings or corruption in the highest places. Last week, the Ateneo campus in Katipunan erupted over yet another complaint of sexual harassment against one of its teachers. The students marched, the Ateneo alum signed a protest petition, the faculty backed the protest, and the Ateneo management apologized and released a memo on a proposed anti-sexual harassment manual.

Another protest came in another form – through a performance from students of the University of the Philippines. A cheer routine that mocked the Duterte administration bested 10 other competing academic organizations in UP Visayas, with the video of the performance going viral last Saturday, October 19.

Then bedlam followed. President Rodrigo Duterte’s social media army harassed the UP students online, swarming them with curses and threatening them with death. The attacks jolted the students and their families; it was their baptism of fire, their face to face with technology-fueled hate and propaganda. 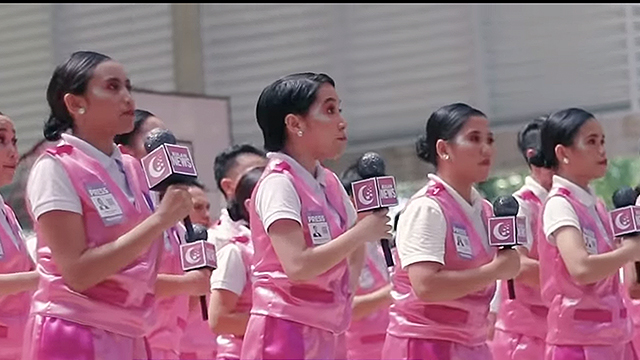 CHEER AS PROTEST. Students from the University of the Philippines Visayas in Iloilo City perform a cheer routine on October 16, 2019, that mocks the Duterte administration. Screenshot of Video from Ruperto Quitag

If you think the young will back down from the chaos, think again. The world beckons them to act – whether through a global climate strike, or a student revolt in Cairo against a dictatorship, or the stunning street protests in Hong Kong, or the past #FeesMustFall campaign in South Africa.

Trust them, too, to inspire us, as shown by the feat of gymnast Carlos Yulo. We recognize the young athletes' efforts in our editorial on Monday, October 21.

What has triggered our youth recently? The Pisay protests – and others – are worth remembering.

UP students stage walkout in protest of militarization

From Luzon to Mindanao, youths vow to fight return of dictatorship

Students in anti-Marcos burial protest: We will never forget

FAREWELL TO THESE MEN

If there’s anyone who knew the value of protests in a democracy, it is the late senator Aquilino Pimentel Jr, who died on Saturday, October 19, at the age of 85. Arrested 4 times for standing up to the Marcos dictatorship, Pimentel showed us the meaning of resilience. Recommended read: Nene Pimentel: Courageous stalwart of democracy

Senior Associate Justice Tony Carpio took resilience to a new level, as he navigated the power corridors and moved a lumbering bureaucracy to action by simply taking the long view and parking his frustrations for the greater good. The best chief justice we never had will be turning 70 on Friday, October 25, retiring after 18 years from a court that he led quietly and rigorously without the title.

We’d like to believe that we have not seen the last of Justice Carpio. The nation should –and will – continue to gain from his wisdom and resilience, outside the gates of Padre Faura.

OTHER KEY EVENTS THIS WEEK

MONDAY, OCTOBER 21
Canada’s general election (Monday evening in Manila). It's a dead heat between the Liberals, led by Canadian Prime Minister Justin Trudeau, and the Conservatives.

WEDNESDAY, OCTOBER 23
Mark Zuckerberg testifies before the US Congress on digital coin Libra

Have a meaningful week ahead! For comments, please email me at glenda.gloria@rappler.com. – Rappler.com