Do we need to die to do our jobs well?

Before anything else, if you're wondering what last week's newsletter was all about, it's here: Of taipan deaths and risk-taking.

Over the weekend, at a recent forum with students in Bacolod City, Negros Occidental, a province in the Visayas, a teacher of Communication told me that very few students of the University of St La Salle, if any, choose to pursue a career in journalism.

I asked, “So where do they go and what do they aspire to be?” She replied, “They want to be bloggers and influencers.” In a medium-sized auditorium where the #MoveBacolod event was organized by our civic engagement arm, MovePH, only one hand was raised when I asked who wanted to be a journalist. I felt quite sad.

In another conversation with a local journalist, I learned that a senior community press editor earns on average only P20,000 (US$400) a month. That’s a little more than what a newbie journalist in Manila would earn. Yet that senior editor of a community newspaper will have to not only edit stories and close his or her newspaper’s pages, but also have to hunt for advertisements and other sources to sustain the paper’s business, and on occasion, even fend off threats to life and security.

Assuming having to support a family and kids or parents or siblings, how far will P20,000 go? This also partly explains the strong temptation that corruption poses. Many local – and even national – politicians wrongly assume that all journalists can be bought or have a price tag and offer them token “pang-sigarilyo” (money for cigarettes). Professional journalists who know their craft, its demands, and standards are terribly insulted and offended by brazen, in-your-face offers of bribes from officials and politicians alike. And I’m not even talking about PR practitioners and businessmen who do the same.

Manila-based journalists have utmost respect for their local counterparts who manage to keep their heads high in a sea of co-opted colleagues who compromise the profession and their independence (I have low tolerance for statements of support for the government being issued by a group that dares to call itself the “National Press Club,” but let's not get distracted). We know that the challenges and dangers that community journalists face are double, if not triple, what we face in the metropolis.

Impunity. Thus far, the Philippines ranks among the “worst five countries nearly every year” since the Global Impunity Index of the Committee to Protect Journalists was published in 2008. We stand alongside Somalia, Syria, Iraq, and South Sudan in the Top 5. 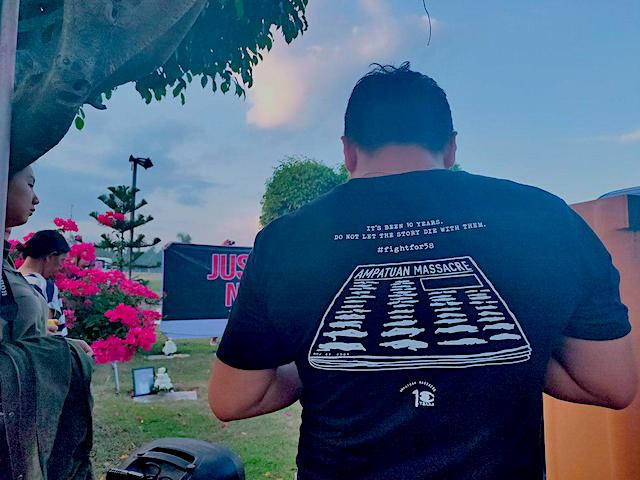 10 YEARS. Relatives of those ambushed in Ampatuan, Maguindanao still await a verdict after a decade. Photo by Lian Buan/Rappler

This ranking is caused, in part, by the ambush of 58 people in Ampatuan, Maguindanao – 32 of them journalists and media workers – on November 23, 2009. It’s been a decade and no verdict has been handed down by the court (see photo of justice reporter Lian Buan).

We will be releasing this week an animation that will show the highlights of the case that has dragged on and caused tremendous agony to relatives of those who were massacred 10 years ago. Imagine, this case has passed 8 justice secretaries and 3 presidents. Lian, who has been tracking this story, provides some statistics and important facts:

A verdict is forthcoming, for sure before Christmas, after the Supreme Court granted a request for an extension of the promulgation of judgment. Initially, a decision was expected November 20. Hopefully, the long wait will be over and justice will be rendered.

To the college kid in the auditorium, journalism as a profession in this country has its huge risks, you should know that. And it’s no different elsewhere. Remember Washington Post columnist Jamal Khashoggi? Reuters reporters Wa Lone and Kyaw Soe Oo? (READ: Myanmar’s truth defenders: Who are journalists Wa Lone and Kyaw Soe Oo) Or murdered Slovakian journalist Jan Kuciak who was investigating corruption links between Italian businessmen and a mafia?

No, we need not die to do our jobs well. Yes, there will be libel cases and all sorts of threats – don’t we know that – but as human rights lawyer Amal Clooney said during the Sergei Magnitsky Human Rights Awards (Maria Ressa was a recipient of the Outstanding Investigative Journalist Award) held November 16 in London: “My hope is we can join forces to create our own cautionary tale, one that signals to the autocrats of this world that when they try to silence journalists, they will hear from all of us.”

I hope, too, yours will be among those voices. Let me know what you think via chay.hofilena@rappler.com. And don't miss our Newsbreak: Beyond the Stories podcasts and Rappler Talk video interviews.