My heroes, our journalists

Hello, everyone! It’s been weeks since our last #Huddle. Last week, Rappler’s senior editors started taking turns sending just one weekly newsletter instead of the 4 of us sending on separate days every week. But you’ve been hearing from me more often lately, as I’ve been writing our Coronavirus Updates newsletter several times a week.

This month’s #Huddle is still related to the outbreak, but as this newsletter had set out to do from the beginning, this will let you peek into how the newsroom works, how our journalists cover, what we discuss in editorial chat channels.

Let me first take you back to the first election season that Rappler covered, when most of the staff were fairly new in the industry. As we entered the homestretch of the campaign, I spoke at the general assembly, where I devoted perhaps a maximum of 3 sentences at the beginning to acknowledge in general terms the impressive work that the staff had been doing. The rest of the time, it was about what we hadn’t done yet, what were left to probe, and what other exacting work everybody was expected to deliver on election day and the two days after that.

Before the meeting adjourned, a “complaint” was already whispered to me that some young people in the room were “hurt.” They were expecting to hear some sort of a longer toast to their accomplishments instead of being told what they had missed so far. I said to their “messenger”: “Because you being good at what you do is expected and a given. I was hired to push you harder.”

That was 7 years ago, with occasional turnovers in between, and the message was understood. Now it’s my turn to remind the reporters to slow down during a marathon or crisis coverage. And. They. Wouldn’t.

Such as in the face of this coronavirus threat. In the chaos of an island-wide lockdown. In the uncertainty of a national crisis.

I may be providing direction, with the elders sharing nuggets of wisdom (and, if we were not working from home, my free coffee, muffin, or pizza). But there are the desk editors, producers, and artists, who stay up to the wee hours to process reports coming from the field; and the researchers, production specialists, community managers, and social media producers who enhance and amplify the reporters’ work – on top of publishing their own content.

And we are all amazed by the enterprise and doggedness of our reporters. For every special coverage, they study. They plan. They prepare. They don’t look back. These days, they practically don’t sleep.

Because more than fulfilling their responsibility to the newsroom, they consider themselves accountable to the public for how truthfully, accurately, and compassionately they will capture what’s happening. More than a duty, making sense of this almost surreal turn of events is, for them, a commitment to the vulnerable.

They don’t tell me these things, I just know. I gather it from our exchanges in the chat channels, their side comments during meetings, their kuda (they call these #TedTalk) on their social media walls, the questions they raise in the newsroom and the field, the leads they pursue.

You must have seen them in action these past days, at the checkpoints when the Metro Manila lockdown started midnight of March 15. In deserted transport terminals, in “carmageddon” at the borders of the metropolis when the Luzon-wide lockdown took effect midnight of March 17. They were wearing face masks, practically shouting their questions at equally weary commuters at least a meter away from them.

Away from the public eye, after the Facebook Live broadcasts from the streets, they were bent in front of their laptops, filing text stories, writing scripts for their vlogs, preparing editing notes for the videos, scanning our photo bank for images, answering desk editors’ queries, while trying to grab a bite in between. These things I “saw” – because they were telling me where they were, what they were doing, where they’d go next. 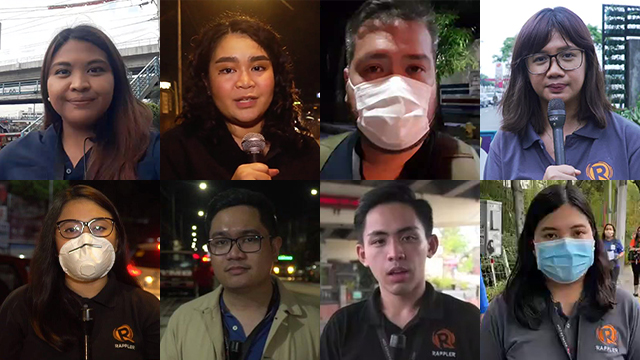 TOP ROW (from left): Aika Rey, Bea Cupin (our Lifestyle Editor, who volunteered to cover since she used to be a PNP and political reporter anyway), JC Gotinga, Lian Buan. BOTTOM ROW (from left): Mara Cepeda, Ralf Rivas, Rambo Talabong (who planned the deployment and served as field commander), and Sofia Tomacruz.

I’m the kind who feels uncomfortable training the spotlight on journalists, but allow me this one time to show you why Rappler’s reporters are heroes in my eyes.

Check out their special coverages over the years.

And find out below where some of them want to take this coronavirus crisis coverage in the next weeks. You may find common interests and give them leads, share with them your expertise, or fund their investigation into these issues.

Share as well our tribute to the bigger heroes in these trying times: 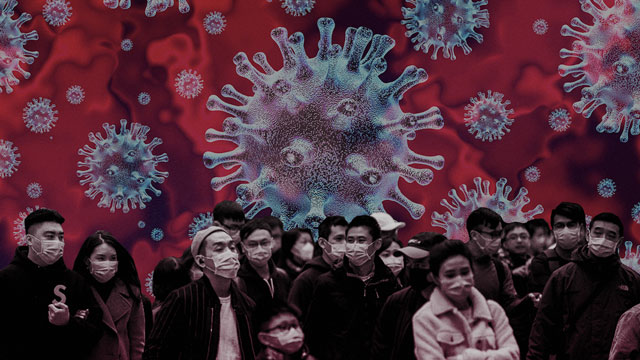 I want to continue following how public safety is enforced during the time of a lockdown. The police is given almost a free hand with guidelines that come in trickles in the name of preventing the spread of the coronavirus. We have to be here to tell the story when they get drunk with power and forget that, as a civilian police force, they should still show empathy for fellow Filipinos amid the crisis. I’m also monitoring developments in the capital, where now, more than ever, the promise of Isko Moreno’s new Manila for the poor and marginalized will be tested.

Health, House of Representatives, Office of the Vice President

I want to delve into the nature of the disease based on who’s getting infected in the country. Because 52% of cases so far are admitted in private hospitals, they likely come from the middle class, those who can afford to travel abroad. What about the poor? Are any of them already exposed or infected but not tested? How are the people in the slums doing in this lockdown?

I want to see how this lockdown will impact the poor: those with no cars of their own, no cash to stock up on food and supplies, no safety nets if they lost their income. In our scramble to protect ourselves from mortal danger, did we think of those who live daily on the edge, never knowing if they’d make it through the day, daily wage earners (or not even) who live from hand to mouth? Could the lockdown be a death sentence on some, who would maybe not catch the virus but starve in the end?

I’ll write about the economic impact of the outbreak, to analyze how other countries are responding and firing up their economy, how the missteps by the government have affected sectors, and how industries like tourism can recover.

It's apparent that the movement of frontliners was overlooked, as the government issued a blanket ban on mass transport. The same was true for OFWs leaving and coming home to the Philippines. I'll continue to keep an eye on the updates as rules seem to be changing as hours go by.

I want to sustain focus on the police measures – that is, the government’s threat to make arrests during the lockdown, how the Department of Justice is going to justify these arrests using a very broad law (Republic Act 11332). I also want to bring attention to the state of our prisons, especially since Iran has now released over 80,000 prisoners to free up their jails and curb the spread of the virus. The UK is thinking of doing the same. Calls have been made by several groups and experts for the Philippines to do the same, but Interior Secretary Eduardo Año has rejected the calls, saying prisoners are “safer inside.” Many prisoners are held past their sentence because the GCTA implementation is suspended.

I want to look into the effects of the lockdown on the mental health of people. How are they coping with the isolation? There's a real possibility that the number of depression cases will rise. I want to look into how the lockdown affects students’ learning. Private schools have implemented online classes, but how prepared are the students and teachers, even the parents, for this kind of arrangement? Public schools don’t have this capability.