Where the Philippines goes, America follows

And we all thought the world could not take anything more after the coronavirus.

America is in flames – its streets tear-gassed, its stores looted, its dark and turbulent past playing out live on our screens. While riveted by these visceral images, we in this part of the world woke up to the news on Wednesday, June 3, that our anti-American president changed his mind about suspending our military pact with the US. On Tuesday night, June 2, the Duterte administration announced that the PH-US Visiting Forces Agreement (VFA) has a new and renewable 6-month reprieve, much like our very own endo contracts.

Recall that President Duterte made serious his threat to end the VFA in January this year after the US government canceled the visa of his favorite cop who oversaw the first years of the Duterte drug war, Ronald “Bato” dela Rosa, now senator. Check the Duterte-VFA timeline here.

What made the Duterte administration backpedal now? Could be a host of reasons – among them business and security in a pandemic landscape. But we kind of put this in our scenario that before the VFA's expiration in August, Duterte would back down. Because for all his blabber and fury, Duterte would bow to his generals’ needs and the requirements of politics. 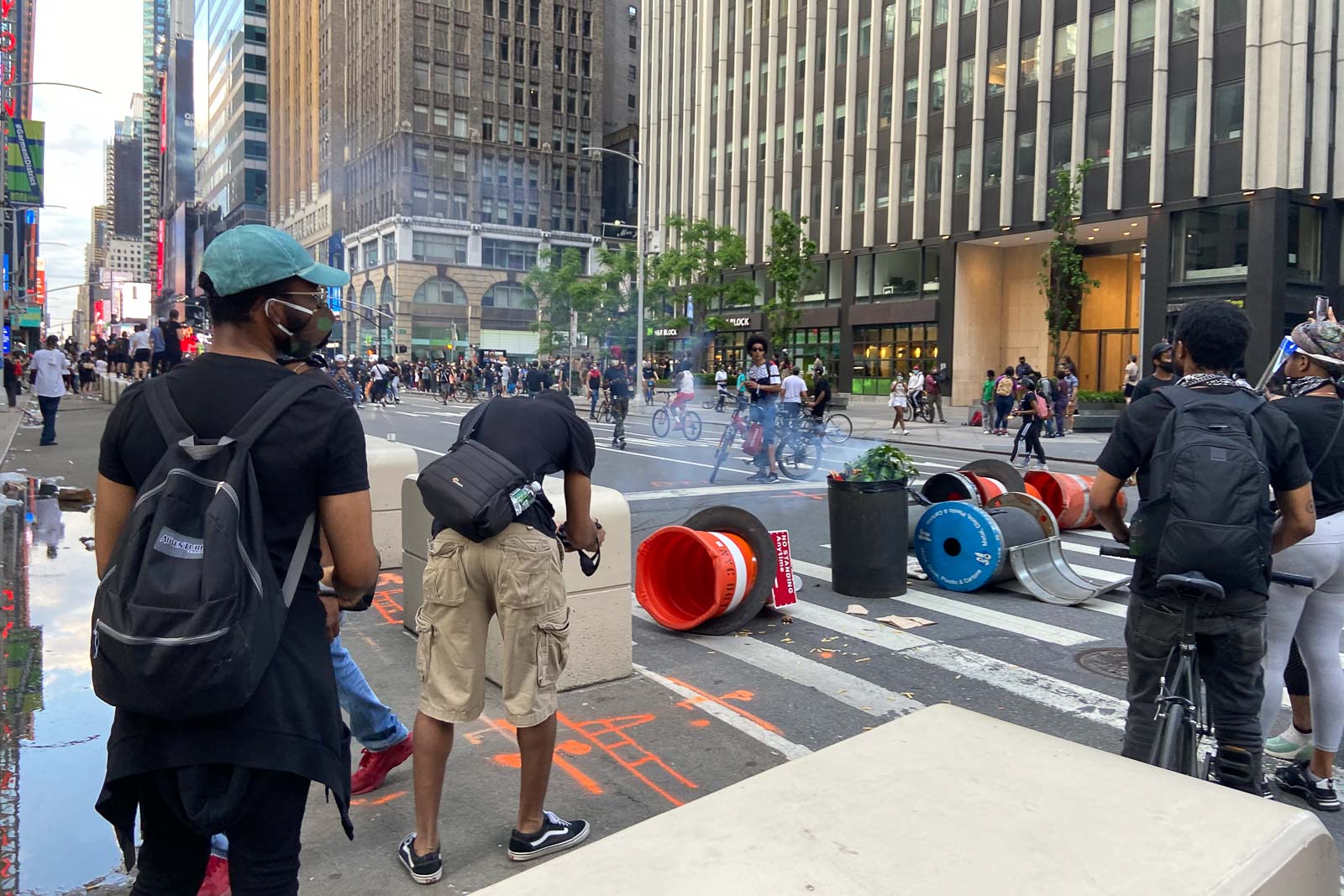 THIS IS NOT AMERICA? New Yorkers' protest on May 31, 2020. File photo by Ryan Songalia/Rappler

Besides, how could Duterte cut off ties with his kindred spirit Donald Trump who is now brandishing Dutertismo, threatening to deploy the US military to quiet the streets and silence protesters? Thankfully, some US generals know where the armed forces ought to stand. Says the former head of the joint chiefs, retired general Martin Dempsey: “America is not a battleground. Our fellow citizens are not the enemy.”

Martial law? Been there, done that.

As we watched video after video of a policeman kneeling on the neck of George Floyd till he died, we could not help but tell ourselves we’ve seen this image before. Because of course we have, even if some of us are in deep denial. In the past days, many Filipinos took to Twitter and Facebook, aghast at the way the police killed George Floyd and hashtagged their anger #BlackLivesMatter – they who never flinched nor protested the 4-year killing spree in our streets in the name of defeating drugs and communists.

We have thousands of George Floyds. But they’re abused not because of the color of their skin as much as because of where and how they live: in the slums, hand-to-mouth everydays, the so-called dregs of humanity. The Duterte drug war, which has killed 20,000 Filipinos per international groups’ estimates, hit the poor the hardest. Back in 2017, Rappler did this investigative piece and concluded that the war “is fought in the places where privilege does not extend.”

Race in America, class in the Philippines. Literary giant Butch Dalisay comes to mind as he lamented how this nation is so obsessed with – and divided by – class to the extent that we are the most class-conscious society in the region. It is the well-connected class that has impaired us throughout history. Listen to Butch talk about our own idiosyncrasies as a nation in Rappler’s Love of Country podcast.

Technology enables strife and violence. We went (and are going) through this ahead of America. While smartphones have been pivotal in exposing abuse on the streets, they have also been the tools that helped justify and cause the many killings in the Philippines. A classic example is Cebu, where the drug war was first fought on Facebook. And now look at the unrepentant Mark Zuckerberg.

What about the arrests of journalists covering protests in key US states? Beyond getting arrested and demonized in the last 3 years since Duterte came to power, Filipino journalists now face a more existential threat: the Philippines’ biggest media company, ABS-CBN, was shut down almost a month ago while journalists and media outlets in the provinces are constantly red-tagged and made vulnerable to physical attacks.

As if these were not enough, the Philippines in record time managed to craft two laws against terrorism – which is America’s primary war.

Back in 2007, under the Arroyo administration, the Human Security Act (HSA) was passed as the US pushed its allies to fight its war, given the rise of Muslim extremists in the Philippines and Southeast Asia. Here's a piece about terrorism in the Philippines.

The HSA was crafted under a more benign world. It was when freedoms were still valued and reason prevailed. The generals frowned upon it – too liberal, too much leeway given to the accused, too big handcuffs for law enforcers. Even the Americans whined.

And then the Marawi siege happened in 2017, followed by suicide attacks in Basilan and Sulu.
In 2019, the armed forces ramped up its lobby for a stronger law: Military pushes proposal to amend weak anti-terror law
Defense Secretary Delfin Lorenzana made his case before the Senate, asking that a new law allow them one or two months to detain a suspect without a warrant: ‘Security before human rights’: Lorenzana wants tougher law vs terrorism
National Security Adviser Hermogenes Esperon Jr was more forthright. When asked last year if the government needed to extend martial law in Mindanao, he said that if the HSA was amended there would be no need for martial law. Esperon says no need to extend martial law if Human Security Act is amended

Why should this concern you?

Today, consider HSA good as dead.
As we write this, the House of Representatives was headed for the final approval of the more draconian anti-terror bill that will replace the HSA. Certified as urgent by Duterte, the bill is headed for ratification before Congress adjourns on Friday, June 5.

Why should this concern you? Well, we’re already terrorized as it is. This impending law will legitimize not only repressive measures against terror but also the shortcuts that the police and the military have been empowered to take in the last 4 years. The courts and the legal back-and-forth between victim and abuser have been the last resort for many Filipinos under Duterte; this completely robs them of that.

So on the week that the Philippine government is friends with America again, it is arming itself with more power to run after America’s enemy – plus more. I guess nothing beats first love.

Send me your thoughts at glenda.gloria@rappler.com. – Rappler.com