(This newsletter was emailed to Rappler subscribers on June 29, 2020)

You just ended your first week as the overseer of President Rodrigo Duterte assigned to supervise Cebu City’s response to the coronavirus pandemic.

First off, welcome to Cebu. We Cebuanos have some questions for you.

We only heard from you directly once on Tuesday, June 23, when you arrived. We were caught off guard by your two surprise announcements this week: first, when the police announced that quarantine passes were going to be revoked effective almost immediately; second, when you announced the barangay lockdowns to the national media.

We were surprised to learn from national media that 12 of our barangays were going to be placed on hard lockdown, because, frankly, about a month ago, the Cebu City health department stopped publishing the number of cases per barangay. (MAP: Where are the coronavirus cases in Cebu City?)

When you left, your team left us with only more questions than answers.

Since the decisions you and the national government make affect the lives of about one million Cebuanos in Cebu City, I called out to Cebuanos on Twitter if they had questions for you. I got a few responses.

I guess this is the most obvious one that has yet to be answered after a week of investigation by the joint task force.

When asked about your assessment of the situation, Department of Environment and Natural Resources Undersecretary Benny Antiporda, speaking on your behalf, said, “What’s important is that the actions of each leader are unified so that the people are not confused.”

Are they not unified? This is the first time in recent years that the Cebu City government with Mayor Edgar Labella, and the provincial government led by Governor Gwen Garcia, are on the same side of the political fence. Both are also friends with influential Duterte appointee Secretary Mike Dino of the Office of the Presidential Assistant for the Visayas.

They are all allies with the Duterte administration. So what’s the problem?

So far, your deputy implementer said that the lockdowns would be granular lockdowns – by sitio, street, building, or house – instead of citywide.

We’ve actually been doing this already, sir. Sitio Zapatera was locked down as early as April, then Sitio Alaska in Mambaling in May. And yet the cases continue to rise.

What we’re doing wrong is probably deeper than this assessment, and we hope there is something more specific than that in the works. 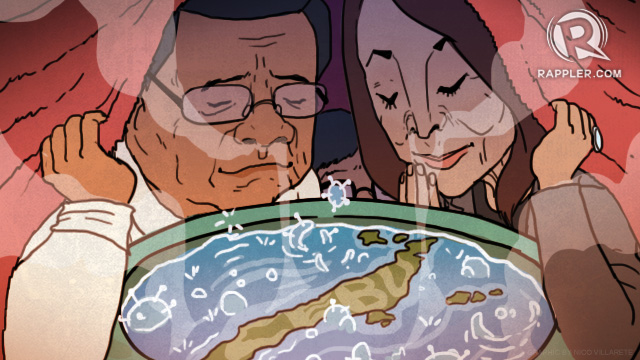 With the hard lockdowns plan in the 12 barangays, how will you ensure residents don’t go hungry?

In Barangay Mambaling, there are reports about food running out. Our city has denied this, but the residents even put up a sign begging for food.

Yet the city has been hounded with questions of overpriced relief goods and even missing chickens.

Will the national government oversee the distribution of aid as well?

Making sure people have food on the table is probably the best way to keep people at home and off the streets, even more than deploying battalions to patrol the barangays.

Will policies for Cebu City be expanded to the province?

While the provincial government would always make it a point to distinguish themselves from Cebu City, where most of the cases are, the number of infections in the municipalities and cities has clearly accelerated.

The Department of Health named it an “emerging hot spot” and said Cebu Island as a whole was yielding a 32.8% positivity rating from June 16 to 24. This means 33 people out of 100 were testing positive for the virus in the entire Cebu.

This is much higher than Metro Manila’s, even, at 7.2% for the same period.

This is just as concerning as the situation in the city.

The final question is from me: Could you have a word with your local counterparts on data transparency?

As you’ve pointed out yourself, the number of total cases in Cebu City depends on who you ask.

If you ask the Department of Health Central Visayas, the number is already at 5,598 with 156 deaths. According to the Cebu City Health Department (CCHD), it’s 4,831 cases with 150 deaths.

So which is it?

This is only one of many questions we’ve been struggling to get clear answers for from our health officials.

In fact, the week before Cebu City went on general community quarantine, the CCHD stopped reporting the barangay totals – which they were releasing consistently before – without explanation.

When asked by reporters, they explained that it was to not “stigmatize” residents of the barangay.

It’s an understandable concern, but is withholding data really the best way to address that? Or perhaps barangay education programs would be a better way?

Perhaps the answers to Cebu’s inability to contain the virus is not something that can be seen in the sky with an aerial inspection, but on the ground, among the residents themselves who have been living this nightmare for the past 3 months. These are the same residents who’ve been told by their leaders that the virus is “not that deadly” and that the local government has “got it under control.”

The fact that you’re here says that, obviously, the residents have been told wrong.

So, we ask again, what’s the plan? – Rappler.com